On April 2nd, the PTG lab presented their first study at a Psi Chi gathering.  Their study was entitled, “Examining Posttraumatic Growth in Adolescents: A Cross-Cultural Comparison of Japanese and American High School Students.  The overall purpose of this study was to examine PTG in high school students, or in other words an adolescent population due to limited research that focuses on PTG in adolescents. 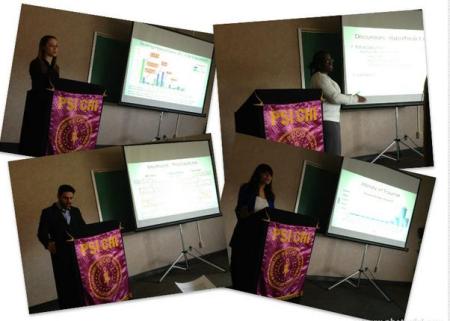 Each of the lab members worked extremely hard on this presentation and it definitely showed.  Congratulations lab members, job well done!

Listen to the presentation below:

Congratulations are in order for the lab members!  The Department of Psychology here at Oakland University have rewarded lab members Kellie McGuire, Insia Thomas and Sharell Elam with the Undergraduate Psychology Research Endowment Award.  This award will help support the cost of registration, travel and lodging for the Midwestern Psychological Association conference in Chicago.  The PTG lab wants to say thank you to the Department of Psychology, as well as the Department Chair Todd Shackelford for  issuing this award to the lab members; it is truly appreciated!  Congratulations Kellie, Insia and Sharell on a job well done!  Once again, click on the links below to read up on the studies that will be presented at MPA this coming May: