Members and friends of the PTG Lab participated (and ended up soaking wet!) in another Fitness Fundraising Event hosted by the Shelby Jane Seyburn Foundation on Saturday, September 7th. We enjoyed boxing and supporting our favorite foundation!

The goal of the Foundation is to support Shelby’s passion of research on PTG and resiliency. The Foundation also honors Shelby’s memory by supporting Psychology Students’ research activities by awarding travel grant for professional conferences.

More information can be found at https://shelbystrong.life/news-events/

Dr. Taku recently discussed the five major topics of study in our PTG Lab over on her Youtube channel. Check out the video here below and click here to visit Dr. Taku’s Youtube page where you can see all of her other videos!

The PTG Lab recently attended the 127th meeting of the American Psychological Association (APA) in Chicago, IL, from August 8-11th. Members of the lab were given the opportunity to present research project, as well as learn from other researchers in the field.

Olivia and Velinka were first to present their research poster titled Does Disclosure Moderate the Impact of Rumination on Posttraumatic Growth in Firefighters? They were able to share their findings after examining the relation between intrusive and deliberate rumination, problem-solving, and posttraumatic growth. They found that deliberately thinking through and talking about traumatic experiences may affect one’s outlook about future interests and opportunities. The project originated from a study in Japan and involved collaboration with researchers Satoshi Kibi, Rei Oshiro, Dr. Takafumi Soejima, Dr. Kiyoko Kamibeppu, and Koichi Hiraki from Japan, many of whom traveled to Chicago from the convention.

Olivia also presented a research poster authored by Alvin and herself titled Resiliency Moderating the Relationship Between Failure and Wisdom. This research, which originated from Alvin’s Master’s Thesis, examined the way failure experiences predict fear of failure and wisdom as well as the moderating effects of resiliency on them. Findings revealed that both fear of failure and wisdom increased as individuals experienced more failures. However, resiliency only moderated wisdom especially in individuals who started with high resiliency.

Brooklin Adams presented a research poster authored by Whitney and herself titled Impact of Dolphins on Children’s Social Support and Dolphin Welfare Knowledge, stemming from Whitney Doctoral Dissertation. The study looked at the impacts of wild dolphin programs on participants’ perceptions of support from parents, pets, and the dolphins, as well as dolphin welfare knowledge. The main finding was that participants from both Florida and Hawaii were able to gain more knowledge of dolphins welfare, from how they like their food to if they enjoy being alone or with other more, as well as increase their perceived support. In addition, Brooklin presented research conducted by Jessica titled Dichotomous Thinking and Self-Esteem in Adolescents which examined participants levels of self-esteem, resilience, and dichotomous thinking. It was found that those with higher levels of dichotomous thinking also had higher levels of self-esteem and resilience, which could lead to the use of dichotomous thinking as a mechanism for traumatic events, and maintaining levels of self-esteem in adolescent youth.

Alex presented research titled PTG and Illusory Growth: Gender Perceptions of Different growth Types, which examined how participants perceived a posttraumatic growth and a illusory growth vignette scenario regarding a fictional individual “X”. He found that participants perceived the PTG vignette to be more female and the Illusory growth vignette as more male. He also presented his research poster on Relating to others’ Trauma: Does Relatability Affect Posttraumatic Growth? which examined how people related not only to events of trauma but also the experience of trauma. Clinical efforts or support groups would benefit from being guided by people who have not only grown themselves but also experienced the same events.

Dr. Taku also presented a research poster authored by Whitney and herself titled Posttraumatic growth and Pets-Does Species Matter?, stemming from Whitney Doctoral thesis. This study looked at what type of animals participants percieved to be the most helpful after traumatic events. It was found that for participants dogs are the most helpful in aiding in growth after traumatic life events, when compared to cats, and other animals such as reptiles or birds.

In addition, our collaborators from Japan, Koichi and Satoshi presented their studies on PTG. Satoshi received the award! Congratulations!

She designed her study for her doctoral dissertation, entitled “Psychological Growth, distress, and educational impact of dolphins and dolphin-assisted therapy in children”. The purpose of Whitney’s study is to examine the efficacy of dolphin assisted therapy by interviewing children. Data collection for this study will begin in 2018 in Hawaii and Florida!

She designed her study for her honors independent research project, entitled “Exploring Military Experiences: Clarifying the Relation Between Resiliency and Posttraumatic Growth”. The purpose of Jenna’s study is primarily to examine the relation between resiliency and posttraumatic growth, as well as many related variables such as coping and social support in a sample of military personnel. An additional key purpose of the study is to compare two resiliency assessments in order to add clarity to the understanding of this construct and promote consistency in measurement. Data collection for this study has begun, and we are all eager to see the results!

Lab member, Shelby, recently presented the progress of her independent research project, Teen Mom Programming. The PTG Lab will be collaborating with a local high school to investigate the effectiveness of educating teen moms on posttraumatic growth and the importance of social support. This project is clinically significant because providing teen parents with resources and support may properly educate them in areas such as wellness, childcare, resume building, etc. Congratulations goes to the PTG lab for receiving the CAS Community Engagement Grant. We are all excited to use this opportunity to develop a new educational intervention program to assist teen parents to foster their social support and personal growth.

Lab member, Jenna, presented an article Reliability and Validity of the Brief Resilience Scale (BRS) Spanish Version by Rocío Rodríguez-Rey, Jesús Alonso-Tapia, and Helena Hernansaiz-Garrido. The purpose of this study was to adapt the BRS to the Spanish language and to demonstrate reliability and validity of this scale. The researchers hypothesized that the Spanish version of the BRS would demonstrate good validity and reliability and that participants with higher levels of stress would have lower resilience. Results indicated that the Spanish version of the BRS showed adequate reliability, validity, and sensitivity of its scores. Results also indicated differences in the level of resilience only significant between parents of critically ill children and parents of children with cancer. After discussing the article, Jenna presented her own hypotheses that she can potentially test during her time in the lab.

Lab member, Geena has recently been accepted to the University of Michigan!

Geena will being working toward her master’s in social work in the fall 2017. She will be concentrating on children and youth in families and society. Her ultimate goal is to work with youths who have been abused and neglected, as well as their families. She hopes to take what she has learned in the lab about posttraumatic growth to help foster growth in these children and their families through private and group therapy, intervention programs, and more.

Geena has helped with psycho-education at local high schools to educate at risk youth on posttraumatic growth. The lab has helped her to expand her writing, public speaking, critical thinking, and research skills which she plans to utilize going forward. Geena hopes to continue to help with lab projects and community psycho-education in her spare time. Congratulations, Geena!

Lab member, Jenna, presented an article to the lab entitled “Personality, personal values,
and growth in military special unit patrol teams operating in a polar environment” by Anders Kjaergaard, Gloria R. Leon, Noah C. Venables, and Birgit A. Fink. First semester lab members present an article in order to enhance their research skills and to present their interests to the lab. The purpose of this study was to research 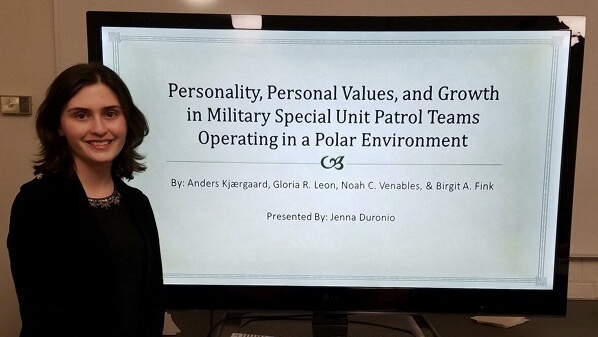